English translation (have fun with google)

The report shows that 75% of trafficking is related to forced labour and domestic servitude, while the least common one has to do with sex exploitation. The observed prevalence of human trafficking related to labour exploitation when people are locked up to work for long hours with little or no pay is higher relatively to situations related to sex business. [I.L.] 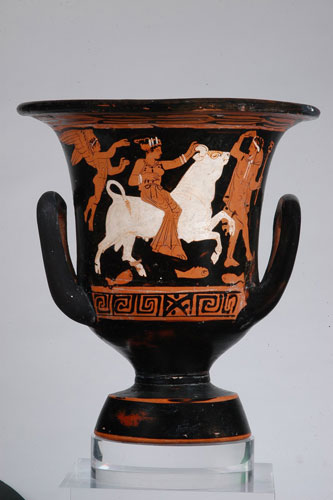 Zeus, transformed into a white bull, carries the Phoenician princess on his back. Hermes leads, showing them the way to the island of Crete, while the winged Eros accompanies them
Photograph: Photographic Archive of the Museum of Cycladic Art

Laura Agustin: "Sex at the Margins - Migration, Labour Markets and the Rescue Industry" In 2005, the Vatican released a document calling prostitution “a form of modern day slavery”. The document, developed at the First International Meeting of Pastoral Care for the Liberation of Women of the Street, added that “sexual exploitation, prostitution and trafficking of human beings are all acts of violence against women,” and “constitute an offence to the dignity of women and are a grave violation of basic human rights.”

What's Wrong with the 'Trafficking' Crusade


It's the season when the United States issues its
annual Trafficking in Persons Report (TIP). Having
named sexual slavery as a particular evil to be
eradicated, the United States grades other countries
on how they are doing.

On the one hand, it sounds like an obvious way to do
good: Describe the ghastly conditions you as a rich
outsider observe in poor countries. Focus on places
where sex is sold. Say all women found were kidnapped
virgins and are now enslaved; announce to the world
that you will liberate them. Organize raids. Denounce
anyone who objects - even if their objection is that
you are intervening in their country's internal
affairs. Ignore victims who resist rescue. Use lurid
language and talk continuously about the most
sensational and terrible cases. Justify your actions
as a manifestation of faith, as though it exists only
for you. Mutter about "organized crime."

This is also the season when tourists leave the United
States en masse to visit the rest of the world, where
their country is more disliked all the time. People
who used to say: "It's just the president [or the
government], ordinary Americans are all right," now
say it less often. Ignorant, destructive interventions
into other countries' business have been going on too
long.

Grading everyone else on moral grounds is highly
offensive, particularly when such grades are
accompanied by threats of punishment if the line isn't
toed. It's distressing to witness the deterioration of
what good will is left toward this country since the
post-2001 wars were initiated and campaigns
intensified that presume the United States Always
Knows Best.

For crusading politicians and religious leaders, a
rhetoric of moral indignation is effective in uniting
constituents and diverting the collective gaze away
from familiar problems at home. So the culprits, those
who get bad grades in the TIP, live far away from U.S.
culture, which is assumed to be better. Intransigent
local troubles - prisons overflowing with African
Americans, millions of children malnourished - are
swept aside in the call to clean up other people's
countries.

This moral indignation emanates from people who live
comfortably, who are not wondering where their next
meal will come from or how to pay doctors' bills.
These moral entrepreneurs do not have to choose
between being a live-in maid, with no privacy or free
time and unable to save money because the pay is so
bad, and selling sex, which pays so well that you have
time to spend with your children or read a book, money
to buy education or a phone.

It is easy to haul out sensationalistic language (sex
slavery, child prostitution), but it is much harder to
sort out the real victims from the more routinely
disadvantaged and trying-to-get-ahead. Those who know
intimately the problems of the poor in their own
cultures rarely deny that they can decide to leave
home and pay others to help them travel and find work,
in sex or in any other trade.

"But sex for money is disgusting and degrading; no one
should have to do it." And should anyone have to clean
toilets all day? Risk being maimed in unsafe fireworks
factories? Should children have to spend their lives
in lightless tunnels of mines, or women have to remain
married to men who are cruel to them? The world is
full of things we wish we could eradicate - but isn't
starvation the first of them? Why is there no
equivalent moral furor over hideous poverty? Are we
meant to believe that sex without love is worse than
military violence? All over the world, selling sex
pays better than most jobs readily available to women,
and many do not believe it is the worst possible
experience they can have.

What's questionable about the TIP is not the defense
of children or anyone else against true violence -
it's one government's assumption that it has the right
to judge everyone else and apply a draconian
definition of exploitation that does not ask people
whether and how they would like to change their lives.
Questionable is the focus on the photogenic, cowboy
moment of rushing in to rescue slaves, with no
interest in what will follow.

Victims are "protected" rather than granted autonomy.
At the Empower Center in Chiang Mai, Thailand, signs
written by migrant women "rescued from" selling sex
include: "We lose our savings and belongings"; We are
locked up"; "We are held till deporation"; "We are
interrogated by many people"; "Our family must borrow
money to survive while we wait."

From the standpoint of social science, the TIP is
gravely faulty. It never explains how data were
gathered and compared across so many languages and
cultures, or who did it exactly under what
circumstances. A raft of other research shows enormous
diversity among people who sell sex, and a wide
variety of experiences in the sex industry among both
migrants and people who stay at home. Studies show
that the worst kind of trafficking can happen to
people doing other kinds of jobs - and to men. Women
all over the world, including the poorest, repudiate
being characterized as above all sexually vulnerable.

In assuming its creators' moral values are or should
be universal, the TIP ignores local cultures and the
complexities of human desires and functions - yet
another reason tourists from the United States will be
less welcome everywhere this summer.

For the Network of Sex Work Projects, a clearinghouse
of information about sex work worldwide, see:

Laura Agustín lives in London. Her forthcoming book,
"Sex at the Margins: Migration, Labour Markets and the
Rescue Industry," will be available from Palgrave
Macmillan in July. Her Web site address is:


The Social Construction of Sex Trafficking: Ideology and Institutionalization of a Moral Crusade


The issue of sex trafficking has become increasingly politicized in recent years due
to the efforts of an influential moral crusade. This article examines the social construction
of sex trafficking (and prostitution more generally) in the discourse of
leading activists and organizations within the crusade, and concludes that the
central claims are problematic, unsubstantiated, or demonstrably false. The
analysis documents the increasing endorsement and institutionalization of crusade
ideology in U.S. government policy and practice.


A Commentary on ‘Challenging Men’s Demand for Prostitution in Scotland’: A Research Report Based on Interviews with 110 Menwho Bought Women in Prostitution,
(Jan Macleod, Melissa Farley,Lynn Anderson, Jacqueline Golding, 2008)
by 18 Scientists
2008
www.scribd.com/doc/60273535/FarleyCritique-2

U.S. Estimates Thousands of Victims, But Efforts to Find Them Fall Short

Outrage was mounting at the 1999 hearing in the Rayburn House Office Building, where congressmen were learning about human trafficking.

A woman from Nepal testified that September that she had been drugged, abducted and forced to work at a brothel in Bombay. A Christian activist recounted tales of women overseas being beaten with electrical cords and raped. A State Department official said Congress must act -- 50,000 slaves were pouring into the United States every year, she said. Furious about the "tidal wave" of victims, Rep. Christopher H. Smith (R-N.J.) vowed to crack down on so-called modern-day slavery.

Comments that include profanity or personal attacks or other inappropriate comments or material will be removed from the site. Additionally, entries that are unsigned or contain "signatures" by someone other than the actual author will be removed. Finally, we will take steps to block users who violate any of our posting standards, terms of use or privacy policies or any other policies governing this site. Please review the full rules governing commentaries and discussions. You are fully responsible for the content that you post.

The next year, Congress passed a law, triggering a little-noticed worldwide war on human trafficking that began at the end of the Clinton administration and is now a top Bush administration priority. As part of the fight, President Bush has blanketed the nation with 42 Justice Department task forces and spent more than $150 million -- all to find and help the estimated hundreds of thousands of victims of forced prostitution or labor in the United States.

But the government couldn't find them. Not in this country.

Nicola, Andrea Di and Isabella Orfano, Study for the EU-Parliament: "National legislations on prostitution and the trafficking in women and children":
http://transcrime.cs.unitn.it/tc/412.php