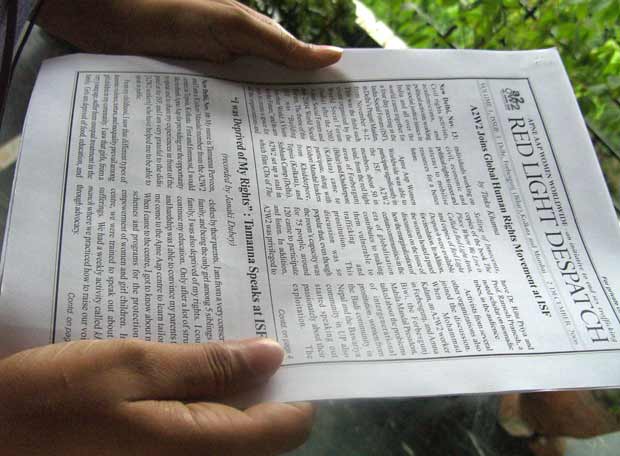 A Lack of Transparency

In a New Delhi village where a staggering 85 percent of women are victims of sex trafficking, the Najafgarh Community Centre is imprinted with the sign of Venus, the symbol for the female gender and for the anti-trafficking organization “Apne Aap Women Worldwide.” On its website, Apne Aap says it runs the Najafgarh Community Centre for the empowerment of women and children, a claim that it makes to donors worldwide. Unfortunately, the striking symbol and the large letters etched below it spelling out “Apne Aap” seem to be the organization’s only mark on the village.

We learned all this when we arrived in Najafgarh this summer with a bold idea to help the villagers transform their situation. After reading about Apne Aap and corresponding with its founder, Ruchira Gupta, we raised $20,000 to fund a vocational training program that would teach the women to sew and provide a sustainable job option as an alternative to prostitution. After an initial $12,000 donation, we received monthly reports from Apne Aap listing names of women and children involved in programs at the Community Centre. Yet we also received desperate e-mails from the community coordinator complaining that Apne Aap was not allocating money appropriately. But in light of the international accolades the organization had been receiving for its efforts to help female sex workers, we were loath to think our $12,000 contribution had been misused, much less that the reports Apne Aap was sending us were blatant misrepresentations. Instead, we hoped this project would allay our exasperation with the sexism and inefficiency we had witnessed on previous visits to the country of our heritage.

Our quixotism was shattered when we finally visited Najafgarh. The “Community Centre” that Apne Aap claims to run is a dank two-room building accompanied by a weathered eight-feet-wide by 10-feet-wide rug placed on the dirt where the children sit. More than half of the children do not attend school, and the informal education “class” for the children has no teacher or curriculum; instead, the kids sprawl themselves on the rug, drawing on slate boards and occasionally chucking pieces of chalk. The vocational training program is a daily sewing lesson taught by a 15-year-old village girl to five of her peers, instead of to the 19 girls and women Apne Aap claimed were attending. The women are completely disillusioned and continue to work in the sex trade. Indeed, after spending several weeks working in Najafgarh, we found that Apne Aap had nearly no presence there, apart from a few foreign interns it sporadically stationed there to “teach English.” Devastated by this farce of an initiative, we contacted the organization to ascertain the fate of our donation. After applying significant pressure upon the organization, we were granted a meeting with the founder, who offered to return $4,000, an offer that remains unfulfilled.

As a result of this experience, we returned to college profoundly disillusioned and mistrustful of NGOs. Apne Aap continues to be recognized as a success in the social-change space; in September, its founder, Ruchira Gupta, was invited to speak at the Clinton Global Initiative Annual Meeting. The misrepresentation of Apne Aap's work is extremely deceitful to donors, because they may come away with a false understanding of how their contributions are used. Moreover, such misleading assertions will continue to set back true progress in Najafgarh, whose reality as a struggling village with extremely poor infrastructural resources is masked by false assertions of impact.

We deeply lament the lack of transparency and integrity in an organization that the social-change community has held in such high regard. Moreover, we fear that this may not be an isolated case. During our time in Najafgarh, we interacted with two other non-profit organizations of questionable efficacy.

Yet to solely blame these sorts of situations on the organization would be to vindicate ourselves from our own burden as donors. Nathaniel Whittemore, founder of AssetMap, recently highlighted that donors tend not to follow or care about the actual impact of an organization. This must change. If they are truly dedicated to creating positive impact, every funding body, grant maker, and donor has an obligation to critically evaluate and seek to understand the social value of any type of donation.

We can no longer subsist on deceit or misrepresentation. At all levels, we need to engage in greater dialogue about what “impact” means, and we need to recognize and not be afraid to discuss failure, while simultaneously working to maximize success. We must focus on honesty, integrity, and transparency if we hope to effect meaningful change.

Despite our experiences this past summer, we are slowly regaining faith in the ability of people to do good. We still believe in the possibility of impact. Nonetheless, in this day and age, a commitment to an ideal of change is not enough. We need follow-through.


Helping Women Who Sell Sex: The Construction of Benevolent Identities

Enthält viele falschen bzw. vereinfachenden Annahmen als Ausgangsbasis:
"IOM claims that few are in stable living situations",
"palermo protocol, underscores the element of exploitation",
"under the age of 18, who is involved in a commercial sex act is a trafficking victim",
"70% of women involved in prostitution are introduced to the commercial sex trade in early adolescence (11-14 years of age) or early childhood" ist vermutlich eine ideologisch gefälschte Statistik.
...

How to be an ally to outdoor(street based) sex workers

How to outreach to outdoor (street based) sex workers

"Prevention tools must work in four major ways in order for them to succeed – they must work
- behaviourally,
- technically,
- politically and
- financially"

Epidemiologist Dr. Elizabeth Pisani, author of The Wisdom of Whores
über HIV-Prevention: "Abstinence, for instance, works technically – you are definitely not going to get HIV through sex if you abstain – but behaviourally, studies tell us that abstinence doesn’t actually work very well, so telling people to cross their legs for the rest of their lives isn’t really going to prevent HIV."

This is why sex workers don’t trust or support Salvation Army.

Das wird von der US Politik massiv gefördert:
"In USA - Hands That Heal Program works with the Human Trafficking Caucus of the U.S. House of Representatives. The program also does education and training in Liberia, Sierra Leone, Hong Kong, and Cambodia. The curriculum is being translated into 9 languages. The program has done training in 10 cities in USA so far, more than a dozen upcoming, 10 or more in the world outside the USA."
Nicole Wood of World Hope International @ Commission on preventing Trafficking on November 18, 2008 unter Leitung vom demokratischen Abgeordneten Adam Ebbin.
dls.state.va.us/GROUPS/trafficking/meetings/111808/sm111808.pdf